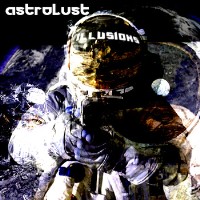 Illusions is a world where only beats, rhythm and dub matter. Created by Dominic H. Francisco aka AstroLust, the album throbs and teases with various triphop dub sounds.

There’s really not that much info about the artist available online but one thing’s for sure, his capacity to capture this cool and dark atmosphere by manipulating samples, synths and instruments is praiseworthy.

This is the fourth release from the artist since June 2012 and it seems listeners can expect some more until the year ends.

AstroLust may not be a prominent name in the electro dubstep scene but he’s definitely bringing his A-game to the musical table.

Illusions is filled with riveting tracks that can cause some serious dancefloor itch when put on. Opening the album is, Status. A hodgepodge of techno beats coupled with great rhythm. It’s the kind that will certainly get a party to a nice fever pitch when put on. Dark Secrets on the other hand, drop the techo dub beat and go for a more industrial rock sound. From the onset, it’s a gritty mix of metal rubbing against metal. Occasionally it lets up but returns to its resident alternative rock sound.

A Brief Visit from the Neurosurgeon elongates the alternative mood of the compilation but easily mixes a myriad of synths and sounds. The transition between genres happens without notice, almost like flipping the pages of a book; you get a variety of ticks and tocks that still manage to resonate as one track.

Creating a record that easily conjures up cuts worth grooving to; Illusions gathers up momentum and energy in each of its singles. If you want something to blast on for that rave party, consider grabbing this one. It’s available as a free download so enjoy!