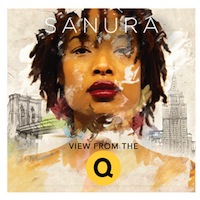 Sanura: View From The Q

Conquering both the modeling and the music scene, Sanura has proven to be a triple-threat damsel.

Her audacity to put up her own money and record a demo paved her way to success. In mid 2008, Sanura was contacted by NJ-based producer Cito to record a full-length project after posting her six-track demo to Myspace. Shortly, the duo wrote, produced, and recorded her independent debut album Ultimate Accessory.

Sanura then returned to VA and eventually sold thousands of copies of the album within months. In 2011, she released her second indie LP The Green Room in cooperation with New York-based Hip-Hop producers. In late 2012, she moved to New York to take her blooming career to the next level.

Co-written and produced by Hungarian jazz pianist Kata Kozma and Sanura herself, View from the Q is her latest musical effort released last May 2013.

Higher takes you one step closer to the clouds. With the thumps in the background fused with Sanura’s sensual vocals, this song is indeed charismatic.

Following with a hip-hop vibe, Live Good will keep your feet tapping while singing along every beat. Just the right song to pump up your night and live a good life.

Fly Free is an easy listening track. Every love bug would put an interest in this song as Sanura sings it with pure intimacy and desire. Her vocal range is showcased in this song, killing the high notes from the start towards the end.

If you are a fan of a wide-ranging mix of Hip Hop, R&B, and Electro-Soul, then View From The Q is a sure playlist must-have.