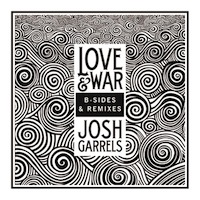 Josh Garrels crafts another goldmine in Love & War: B-Sides & Remixes EP. Released last July 2012, this album features eight tracks that are beautifully anchored to the his critically-acclaimed full-length album titled Love & War & The Sea in Between.

Hailing from Portland, Oregon, Josh Garrels has spent more than a decade cultivating accessible and honest music. Mixing folk and hip hop, his music explores themes of compassion, hope, longing, and liberation. Garrels is the founder of independent music label Small Voice Records and has released six albums throughout his career.

Setting the stages with an orchestral welcome is Processional (Mason Jar Remix). Close your eyes and let each percussion, string, and melody flow and bloom in your ears.

White Owl follows with an edgy combination of ethereal strings and dark, slow electronica. The result is a one-of-a-kind piece that brims in spice and flavor.

Stirring things up a bit is Cynicism. Jazzy horns and energy-infused tunes hits in all the right places. While Run maintains the mold of folk musings with intricate guitar play ups and catchy melodies.

Anchor (Beautiful Eulogy feat. Josh Garrels) wraps up the album in an ambient, hypnotic high. Garrels voice shines as it enters each crevice and sound with grace. The rapping hook at the middle is a pleasant surprise, proving the artist’s genre-bending technique.

Love & War: B-Sides & Remixes EP solidifies Josh Garrels not only as a musician, but as an artist who fully embraces his sound and who is not afraid to push the envelope.

The album is available as a pay-what-you-want/free download on Bandcamp.