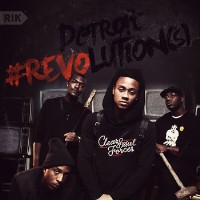 Paying homage to old-school hip hop; expect to find a lot of smooth beats, expert rhymes and a laid-back atmosphere when you listen to Clear Soul Forces.

The four piece crew is composed of  L.A.Z., Ilajide, Noveliss and E-Fav. They first got together back in 2009 on a chance studio encounter and since then, the foursome have been recording and releasing various mixes, singles and compilations.

Detroit Revolution serves as their debut LP and it’s definitely something. Filled with solid rap skills and a catchy vibe; this is worth to check out.

Not all hip hop music is made the same. Certain people have a very specific preference sometimes; there are those that absolutely adore the current hip hop/pop combo while others go for the more raw, old school style of the era.

After their fateful meeting in 2009, Clear Soul Forces bonded together to create this awesome compilation. Naming their album after seeing a particular painting while walking outside, Detroit Revolution is not only an appropriate title but it beams and echoes the raw, street sound you’ve heard from some of the best rap groups from before.

You’ll certainly find most of the tracks imbibing old school rap music; cuts like Half As Long//Twice As Bright, are pretty solid. The album combines a smooth rhythm while the boys take turns spitting out rhymes. Although they resound in loud rockin’ beats, the boys are equally charming when incorporating R&B style sound like in Get No Better and Stack Yo Paypuh!!!

Detroit Revolution is perfect for those who are yearning for that 90s early 80s hip hop beat yet with a modern touch. It’s an exciting record filled with mixes, samples and top notch skills from the emcees. Best part of all is that it’s at a name-your-price download. Grab it and enjoy!