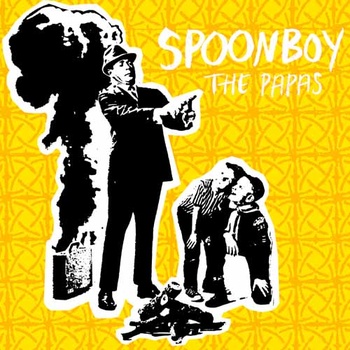 Six full years since he made his last record, Spoonboy is finally back and ready to share his music again. Spoonboy, also known as David Combs, used to play for Washington indie punk band, The Max Levine Ensemble.

The Papas is his second solo record right after his debut way back in 2005 entitled, I Love You, This Is A Robbery.

Heading back to the limelight with a set of 14 tracks that combine punk, indie, pop and sprinkled with quirky lyrics as well as catchy tunes; you get an album that’s exciting and should be worth some space on your hard drive.

The Papas was recorded back in 2010 and was released over at BandCamp at a name-your-price option last May 2011. It was recorded with a full backing band, mostly members of other groups like Grape Soda, Defiance Ohio and Hot New Mexico to name a few. Released in collaboration with four labels (Plan-it-X Records, Fuck You is a Seven Letter Word Records, Discount Horse Records, and Shout Out Loud Prints) the album originally came out in vinyl and cassette tape form while also offered as a digital download.

Starting with one of the catchiest and easily likable tracks on the record; All the Kids in Michigan is an upbeat number that reeks with that basic punk rock ethos. From shouty vocals to the gritty and complaining lyrics, you get a song that is entertaining and raw. Some tracks like Sexy Dreams and Stab Yer Dad, among others, maintains the energy throughout the album. On the other hand, you get to see the singer’s mellow, laid-back side in a single like The Mamas and the Papas.

Overall, the album has that innate capacity to charm its listeners. Whether you’re looking for your new favorite artist or just want something good to listen to. Spoonboy can easily help you out with that. It’s a record filled with fun, unusual punk that you hardly ever hear today. Take a listen to this and grab the download. There’s also an acoustic version of this same record available for download here.