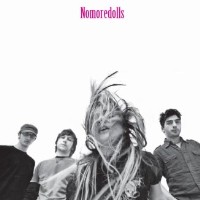 Girl fronted rock band… another Paramore in the making? With the success of female fronted bands slowly on the rise again, Nomoredolls is taking a crack at the formula. Fronted by talented and highly energetic Cecilia Miradoli along with an equally diverse and talented band; Nomoredolls delivers alternative pop rock with a jagged edge.

Although based in Italy, the group has written their tracks in English for a more worldwide appeal.

This self titled debut gives you 12 powerful, energy driven pop rock songs that make you bounce around. Whether they have what it takes to make it big, you be the judge.The name Nomoredolls came about because of Cecilia’s past. The high-energy female used to perform at jazz clubs and essentially played Billie Holiday covers. She confesses that she always felt that people treated her like a “doll” while on stage singing jazz covers.

Although she adores jazz music, she realized that it simply wasn’t her calling and decided to focus her attention to alternative pop rock music. Nomoredolls gave her the opportunity to explore a long repressed side of her that was just craving to get out.

All 12 tracks in this debut album exhibit edginess in every corner. Starting out with upbeat and surprisingly catchy “Electric Sheep,” the band manages to open up their album on a positive note. It is easily one of the best tracks in the entire compilation. “Invisible,” on the other hand, starts up slow and builds to a fast pop rock track coupled with sweet vocals from Miradoli . “Another Girl” was released as a single and won a huge audience in Italy as well as other parts of Western Europe.

Nomoredolls can definitely rock out, although the lyrics are not completely impressive and the enunciation is a bit distracting at times, the album is worth checking out for those who have a special affinity for female fronted alternative pop rock bands.