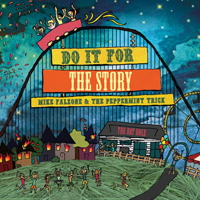 Mike Falzone & The Pepermint Trick “Do It For The Story” – Indie Pop, with a minty aftertaste promoted on FrostWire

Mike Falzone is back with a new band by his side and a new album entitled “Do It For The Story”. Just as his previous release, “Fun with Honesty”, this one is full of “infectious lyrics, catchy melody, and humor”. Guitar & drum heavy tracks dominate the album and Mike’s engaging voice makes it a real pleasure to listen to. Licensed under Creative Commons, it’s available as a free download via FrostWire and is meant to be widely shared with all family and friends!

Seriously though, “Do It For The Story” is one of those Indie Pop albums you listen to once & catch a bad case of “humming” – there is just that one song that will stick in your mind for days!

In 2007, he went on a national tour and opened for artists like Third Eye Blind and State Radio. He has played over 110 shows in just one year (wow!!!), including A National Tour and a Borders Books sponsored tour. In 2008 Mike opened for Kate Vogele (one Tree Hill star), Ryan Cabrera, was invited to Asbury park to play the 3rd annual WAVE GATHERING and released ‘Fun with Honesty’ in Borders Stores and on iTunes. The album was widely popular with FrostWire audience and got over 33,000 downloads in just a few days. Songs from the album were also licensed to MTV immediately following the surge of support and appeared on shows like The Hills, The City, Made, and Parental Control.

In May 2009 Mike, this time with The Peppermint Trick, returned to the studio with Nick Bellmore and recorded “Do It For The Story”. Ever since, the band has been playing loads of concerts and prides itself on being a “band within arms reach of its audience”. They record many YouTube videos, answer to all comments on social networking sites and constantly tweet back and forward with their fans. Recently Mike went on Fox News (:P) to show off his guitar playing skills and his “Liberal T-Shirt”.

The #1 question asked of musicians: “How would you describe your music?”
Our answer: “Indie Pop, with a minty aftertaste, kind of like eating a sexy Peppermint Pattie.” Hey, if someone told me they just heard music that sounds like a sexy mint confection, I’d want to hear what they were talking about.

If you like the album, PLEASE show your support and buy the record on iTunes…its less than $5!!! For an independent musician every penny counts!