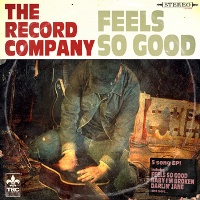 Let the rhythm and blues of The Record Company wash your stale day over. Early this November, the band, which is based in Los Angeles, released their second EP, Feels So Good.

The Record Company is a trio composed of Chris Vos, Alex Stiff, and Marc Cazorla. Although their music has been compared to the classic sounds of Muddy Waters and John Lee Hooker, the band has found a way to add a fresh twist to their own music, making them timeless and unique.

The title track is currently being featured in the trailer for the film Las Vegas, starring Morgan Freeman, Robert DeNiro, Michael Douglas, and Kevin Klinei. Aside from the exposure, Feels so Good has a distinct driving rhythm, which makes it even more attention grabbing.

Starting off with thumping bass and drums that will keep your feet stomping is the second track, Roll Bones. The guitar solo contains stylistic tinges of blues and the vocals is as smooth as a glen mckenna slipping down your throat.

Next stopi is Hard Day Coming Down, which boasts of a manic garage rock intensity. Aside from the band’s rock anthem, an adept jazz-informed horn solo flourishes in the middle of the track, which gives a boogie twist to it.

The trio’s restless style makes each piece sound three-dimensional, making this record worth listening to.