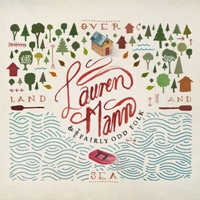 Lauren Mann and the Fairly Odd Folk: Over Land and Sea – Deluxe Edition

Stop all the fuss and let Lauren Mann and the Fairly Odd Folk‘s latest release capture your very soul. Packed with a hefty collection, Over Land and Sea (Deluxe Edition) features eleven plus one bonus track to revamp that folk-pop palette.

The six-man band from Brooks, Alberta is composed of Lauren Mann, Jay Christman, Jessica Christman, Josh Akin, Zoltan Szoges, and Hammer Clark. The band started with songstress Lauren Mann who began collaborating with musicians in 2008 and formed a collective, which became known as “Lauren Mann and the Fairly Odd Folk.”

“Lauren Mann may be one of the best indie-folk rockers that you’ve never heard of,” claimed Moira E. McLaughlin from the Washington Post. And this is exactly what you’ll discover minutes upon listening to the album.

Breezy folk strings opens the album in A Traveller’s Dream. Mann’s pliant and supple voice shines brightly amidst beautiful pop harmonies. This quick tone setter is followed with Fragile. Listen as the this piece try to break and rebuild your soul, piece by piece, with self-reflective lines such as, “We are fragile needing much, we are delicate to the touch.”

In Let’s Make Our Escape, we are treated with folk arrangement flawlessly blended with soft piano keys. While Weight of the World encapsulates sugar, spice, and everything nice as each charming melodies explode in a celebratory charm.

Down-tempo track Of Life and of Death features a thick, dark sound that blooms and decays in its own space. Whether it’s a rainy day or a cozy night, Love, I Lost features great potential to set your mood while satisfying one’s attention.

A standout track, Over Land and Sea channels a light, feel-good bopping vibe with a hit-hat and a soft kick of folk-country goodness. Get lost in Lauren Mann’s lalalalas as she serenade you in this magical celebration of instruments.

Lauren Mann and the Fairly Odd Folk definitely has a great career ahead of them. With accessible sound and whimsical arrangements, Over Land and Sea is a great addition to the folk-pop landscape.