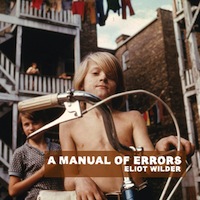 A Manual of Errors is an intriguing album of Eliot Wilder. Its funky beats fused with alternative country folk makes up this exciting album. It has twelve tracks, with two of these purely instrumentals.

Funky raps and beats, and definitely a fun, fun song, A Manual of Errors has more than the usual “interesting” tag. Its creative interlude, sudden silences in between the verses and the chorus creates anticipation. This track is a paradox of good old fun and dark humor.

We Got a Groovy Thing Going has an interesting blend of hip-hop, alternative rock, and folk. Just like the title itself, the track is, well, groovy and it is even an understatement. This is the catchiest track in the album. It is superbly engaging, and will surely play on your mind for hours. Yes, even though it is 6 minutes long.

Among the tracks, Deliver Me has a unique combination of alternative and folk. The voice is layered, echoey blended with alternative music perfectly. It is a beautiful and sentimental piece that will tug your heartstrings.

First Person Singular is a track that will reminds you of superheroes. Its first few minutes will make your head bop. It got a similar approach with “We Got a Groovy Thing Going”, but “First Person Singular” is more haunting and leans toward alternative rock.

Eliot Wilder is not a first-time artist, judging with his releases since June 2012. And with this newest album, his expertise in alternative-folk-hip hop is magnified.