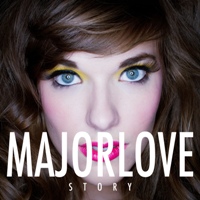 Here are some fresh indie-pop tunes from MajorLOVE. In her EP, titled Story, the Phoenix-based songstress offers five tracks that have genuine appeal to electro-pop fans.

The spotlight focuses on Fire Eyes, where rhythmic beats are superimposed with an equal combination of guitar strings and electro beats. The melody, though with a backbone of pop, also has touches of new wave ’80s disco.

Next stop is Liar Liar. Here, MajorLOVE opts to serenade her listeners with a charming intro before presenting them with a multitude of energized pop tunes that will shake the room.

Title track, Story, is one of the standout pieces in this album, especially with the saccharine piano ensemble that highlights MarjorLOVE’s voice. There’s a particular kind of innocence in her voice that’s very enjoyable to listen to.

In this EP, MajorLOVE has given listeners a glimpse of her pop-drenched, playful music, leaving us wanting more.