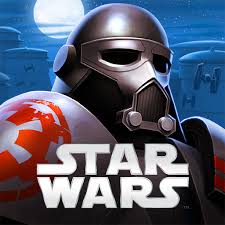 Star Wars Uprising is a role playing game from Kabam. It has many of the elements you’d expect from an RPG game including some of the expected parts of Star Wars. The connection to the movie franchise is going to please its fans, but even if you’re not a big movie buff, you’ll enjoy it as an action RPG title.

The game takes place after Return of the Jedi, though the triumphs of the rebels haven’t reached your system as it is being prevented by the Imperial governor. Your character is a smuggler similar to the character of Hans Solo, and the game has you performing tasks for different bosses. Before the game starts you have to choose a race, character and gender, and then the game begins.

Most of the missions require you to destroy an enemy using a wide array of weapons such as a sword, rifle or laser gun. The controls are simple too: when hordes of enemies come at you, tap at the enemy you want to target and your character aims at it automatically. Your character will keep hitting this enemy until you tap another target, so it’s easy to learn.

The character can be upgraded, and that’s good because in the later missions you’re going to have to be creative with how you use weapons. There will be missions where you have to use the Scatter Shot with your laser gun, and other challenges go beyond the usual enemy hordes, as there are big bosses here too. And just like other RPG games you gain more experience as you play, making it more engaging.