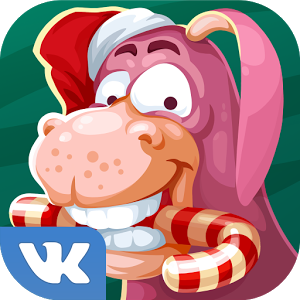 Need a Hero from Alis Games might look like just another match three puzzle game, but the similarity to those other games is minimal. In Need a Hero, a princess has been abducted by an evil dragon and you have to rescue her, and you do this by matching tiles, but there are twists here that aren’t present in other puzzles.

Your goal is to match 3 or more tiles to produce a chain that powers up your character’s meter, and once that’s full you attack the demon, witch or other enemies until they’re destroyed. But there’s more to the game than that since the tiles are actually monsters, and the more tiles you match the greater the incentives.

If you can match six of these monster tiles, you will get a tome that will destroy other monsters nearby. If you can link 11 of these you’ll be given a Water Tome that produces a powerful torrent, and if you chain 14, you will get the Lightning, which if you combine with a specific creature, will get rid of other pieces on the grid. In addition you can perform feats of magic during the game.

Need a Hero has in app purchases for upgrading your character, but unless you’re the impatient type you don’t need to spend real money since you’ll get the upgrades anyway if you keep playing. The gameplay and mechanics are not difficult to learn, and considering there are a lot of things you can do in the game, it’s easy to learn, making this a nice addition to your collection.