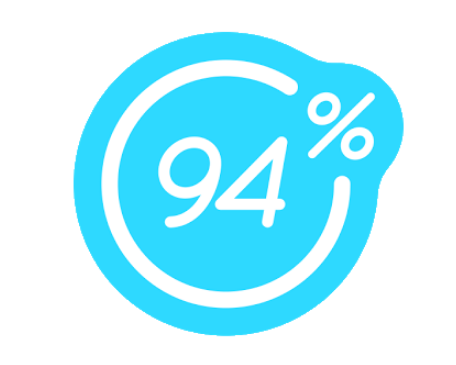 94% is a puzzle game from developer Scimob, and if you’ve seen the Family Feud game show, you’ll have a pretty good idea of how it works. If not, the objective is to find the most popular answer given by 100 people who were polled for the question, hence the title 94%. It sounds simple enough, but there are some challenges here too.

While it has similarities to Family Feud, the game has its own identity, and as a player you must know the top 94% of the answers the surveyed people gave for each question. The question varies greatly, but as an example, you will get asked stuff like “What do most people eat using their hands?”

The most common answer would be cheeseburgers, followed by corn cob, which make up 15% and 9% respectively. Now you need to figure out the rest. 94% questions can be answered in different ways, but the end goal remains the same, and that is to get the most popular answers. During the early part of the game, you’ll get asked what people usually do when they wake up, types of fruits, etc.

For every level there is one image and two text questions. With the image you must figure out the words most popularly linked with that image. If you’re having trouble answering one of the questions, you can use coins to get some clues, which can help quite a bit on the latter stages.

Overall, 94% is a cool game and will appeal to fans of the genre. The animations are pleasing, and the game progresses nicely and it never feels like you’re being cheated.

Ain't No Love: Tears of Joy