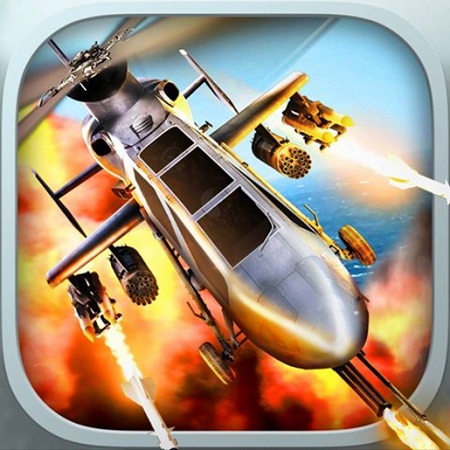 Battle Copters from Chillingo is a multiplayer, air combat action game that puts you in control of a powerful helicopter. As you fly the choppers you’ll be blasting opponents with a barrage of rockets and guns, who’ll do the same to you. In short, this is a dogfight in the unfriendly skies, and it’s all good. The game requires an Internet connection.

Battle Copters has some pretty good graphics and while the action is fast and furious, it doesn’t deteriorate into senseless taps and swipes. As you play, you develop a kind of rhythm and with good aiming and firing, set off several explosions that are nice to watch.

The game has several menus for adjusting and managing your copter, but it’s nothing complicated, and if you’ve played arena battles before it will be familiar. The game can be played instantly, and with Team Deathmatch and Free for All available on 8 player multiplayer, you’re not going to run out of options and modes to try out.

The game controls are arcade style so it’s easy to figure out, and this is a good thing since there could be as many as 8 choppers and 4 drones up there going after each other. As a fighter pilot you get to pilot a dozen different choppers, and there are several customization options available too. When the game starts you can make your own squadron or join an existing one. Either way you can expect a lot of action here: it’s fun, fast and filled with high octane action.