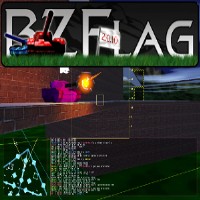 Missing that classic Battle City game? Why not try this game out instead. BZ Flag is a fun 3d tank battle game which lets players go against each other in a network. Essentially, the rules are simple. You get 5 teams, red, blue, green, purple and black (rouge tanks). You score a win if you blow up the tank of the other team while you score a loss if you hit your own team member. Simple, right?

Despite the simplistic gameplay, BZ Flag is surprisingly an addictive and entertaining game. It’s a great way to beat the stress of if you’re simply hanging out with a few buddies and have nothing better to do.

BZ Flag short for Battle Zone Flag, can be played in two ways, you can go for capture-the flag mode or the free-for-all mode. With capture the flag, each team has their own flag and the main objective is to simply get the opposing team’s flag. Free for all, on the other hand, has no other rules except to take out the enemy. Whoever has the highest score is declared winner.

The nice thing with BZ Flag is that you can even run them on old computers. It works perfectly, and as mentioned, the simple game play is definitely a pro rather than a con. It’s a fun game to play since it’s very straightforward and doesn’t leave you scratching your head. Besides, blasting your friends or co-workers into oblivion sounds like a fun thing to do? Of course, as long as you limit it to the game world.

The understated graphics allows you to get into the game without really blocking up your processor (although some gamers complain about their computers crashing). Controls are simple; arrow keys or mouse if you want to move, mouse button to shoot and tab for jumping. What makes the game more interesting is that your tanks can obtain super weapons or powers. All you have to do is get Super Flags, these are colored white. However, be warned. If there are good flags, there are also bad ones. Getting these can cause you to function without a scanner, or have your steering wheel locked to making only left hand turns.

Interested yet? The best thing about this game is that it practically runs on any type of system, yes, even on your precious Mac. To top it off, it’s free for the taking so why not get your co-workers together and get to playing.