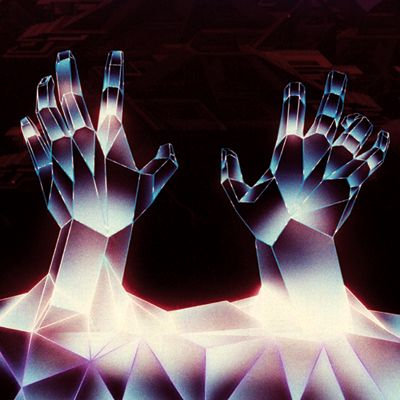 The first half of Le Galaxie‘s debut LP is a dance-oriented tour de force, setting them apart from most wannabe club-fillers the old fashioned way, that is with one solid, mind-blowing track after another. Laserdisc Nights 2 is a compelling album, cleverly blurring the lines between the dancefloor and the minds it houses. It represents an electronic, sweat-infused record not afraid to reach uncharted territory for the sake of the experience. No wonder how the Dublin band progressed after their majestic debut release, with a nomination for Ireland’s Choice Music Prize ‘Song of the Year’ and a big-label deal with Universal following soon after.

The blend of catchiness and uncompromising creativity is rarely more obvious than in opener ‘Earth‘, as the fantastic initial progression paves the way for layers upon layers of synth textures that culminate on a climatic mix of all previous elements. No chorus, no verses, just dance-fueled delight. The track is followed by the smart pseudo-techno of ‘Beyond Transworld‘ and debut single ‘Midnight Midnight‘, the latter featuring an ethereal, atmospheric hook that stands as one of the highlights. ‘Powers of Miami‘ reminds us of the kinetic strength only feasible for a fully man-powered band, the song starts with an LCD Soundsystem-esque drum section that evolves into an 80s-sounding, overblown hook able to transport a mind to another dimension. Just when the band seems to have shown all its cards, they start flashing out a series of unique, less danceable but equally listenable tracks, taking the album into a completely unexpected territory. ‘Blood Beach’ is a cinematic ambient piece, serving as an interlude of sorts. A robotic, synthesized human voice leads ‘The Police Department‘ to entertaining results. ‘VICTORY‘ captures the sense of achievement it is named after in dramatic fashion.

‘Laserdisc Nights 2’ is not your average debut release. The thoughtfulness of each cut, combined with the masterful production makes this an expertly-realized first effort. With funky synths and a sizeable batch of deep, mind-bending offerings, Le Galaxie set themselves on a journey of success. Us, the listeners, can only take the time to appreciate and enjoy the fruits of their accomplishments.