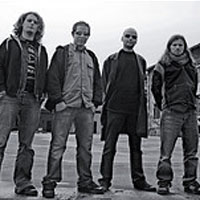 Djizoes: (pronounced “Jesus” in English) is a progressive and powerful part hard rock part metal band from Switzerland. Since their creation in 2002 they’ve managed to amaze many critics and convert many more listeners into die-heart fans. Up to date, they’ve recorded two EPs, two full-length albums, toured around the world & played in front of tens of thousands of people at a time. Now Djizoes: has agreed to distribute some of their tracks free of charge through FrostWire straight to their P2P listeners.

The FrostWire compilation includes two tracks from the band’s first album “In the Papers” (“Sumertime wish” & “Ride the Flames”) and three tracks from their latest release “Erkonoclast” (“Rome”, “Trails” & “Bind us to war”).

Take a look at Djizoes: performing “Ride the Flames” live in Taiwan:

A bit of the band’s biography from their EPK:

The Concrete Fog”, Djizoes: first EP was produced by Post Tenebras Rock after noticing the band at their 3rd concert! Djizoes: then went on to record a 3-track ball teaser, which opened the doors to Japan and the US.

Two 30+-gig tours later they were back in Switzerland recording “In The Papers”, their first full album. Djizoes: released this album in Tokyo in December 2006, setting off their 2nd Japanese tour. The band has just returned from their Asian tour, which took them to Japan, Hong Kong and Taiwan where they played the HoHaiYan festival in front of a 50’000 strong crowd! Their new CD, “Erkonoclast”, was released during the tour.

Djizoes: fan base has grown internationally rallying around their logo, Erkon, present since the beginning and forever to stay, which several fans have not hesitated, amongst other things, to have tattooed or made into jewelery.

You probably wonder why did the band chose to call themselves like that, ha? In an interview with TimeOut Magazine, the bassist Ales Campanelli said: “We were looking for an easy-to-remember band name. But we were thinking of Jesus not in a religious way. We use the spelling as a joke, to get away from all the religious connotations.” He also added that people in Asia & Europe tend to get it, but Americans take it a bit personal… (so please don’t :P)

Djizoes: are currently working on their third full length album and are going to hit the concert circuit again in October for their 6-week US/Asia tour. Stay posted for more info!

Download away and please, let us and the band know what you think by leaving a comment below. Only with your feedback will be able to get you more of the free downloads you want!