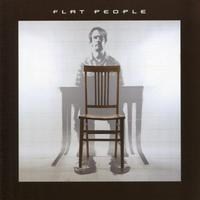 Even though they call themselves the Flat People, it doesn’t exactly mean that their music is “flat.” In fact, it’s quite the opposite. The group creates lovely upbeat, indie pop rock that’s reminiscent of a more indie infused Beach Boys.

Spearheaded by Dallas native, Bob Guittard; the group was first setup back in 2002. After several lineup changes and quite a few recording session, the group finally settled on their current lineup and released this self-titled record.

The compilation is equipped with 12 tracks that are worth checking out. Give this album a download. It’s under creative commons and offered absolutely free.

Mixing alternative, indie, country and a bit of pop; Flat People create a sound that is quite familiar yet unique. Chances are, you’d think that they sound like most indie rock bands that have sprouted over the years. However, the band does manage to stamp their brand into their sound.

The self titled compilation starts off with the catchy cut, Sensitive Clumsy Astronaut. The song beautifully mixes sweet understated vocals with rockish guitar riffs. Although it’s not my instant favorite in the album, it does provide listeners with a good impression of the band.

Speaking of favorites, Oh, Conspiracy, wins my vote in this album. It’s a simple and endearing track that showcases the band’s capacity to create very laid-back, lovely music. The song reminds me of a very mellow and sweet, Weezer, sprinkled with Buddy Holly, beaches and lots of happy sunshine. If you’re just going to listen to one track from the record (and I hope you’ll listen to more,) go ahead and look for this title. It’s the one cut you shouldn’t miss out.

This self-titled record is definitely something to check out. Most of the remaining tracks are equally catchy and filled with nice melodies that’s perfect for relaxing in the shade or under the morning sunshine. Give the album a download right now.