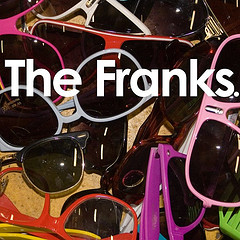 The Franks is an indie punk band from Los Angeles, California. In 2008 they’ve released their debut “album” entitled “Un E.P.” under a Creative Commons license. I put the word “album” in quotes because they zoom through the material in under 15 minutes with 2 songs being in the area of one minute (maybe that’s why is it called “Un E.P.)! Aside from their length, the songs are actually pretty fun and enjoyable.
THE FRANKS are JEAN DON’T, RON RAY GUNN, & MIMI MALONE.


Here is a music video to one of the songs from the “UN E.P.” album “Neon Politik”