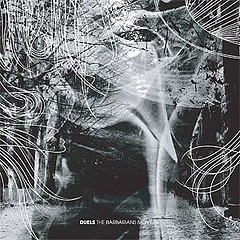 Duels: The Barbarians Move In

Duels is a British indie rock band from Leeds. They formally started playing together in 2005, but became quite popular quite recently after The Guardian described them as “one of Britains most ambitious groups”. The group released their first album in July 2006. “The Bright Lights And What I Should Have Learned” was very highly reviewed and named Album of the Week in The Sunday Times. “The Barbarians Move In” is the bands second album. Released February 14th 2008, Duels is giving it out free as a digital download on the albums first anniversary.

“The Barbarians Move In” received amazing reviews from some of the most prestigious British publications. The Q Magazine called it “…laudably sophisticated, laudably widescreen, Q Recommends” and the the NME said: “unequivocal brilliance…best comeback of 2008 so far – 8/10”.

The digital download of “The Barbarians Move In” includes MP3 versions of:
1. The Furies
2. Sleeping Giants
3. Regeneration
4. Perimeter Fence
5. The Healing
6. Wolvesland
7. The Wild Hunt
8. This Year’s Man
9. Forgotten Babies
10. The First Time/The Last Time
11. The Barbarians Move In
and the digital version of the album artwork and inlay card.

To buy a physical copy of this album, go here.