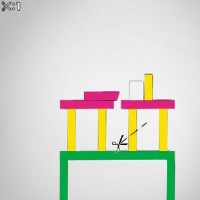 Back in the day, physics based gamea were sparse and hardly available. However, today, it’s almost everywhere and there are tons of physics based games that are fun to play. Take for instance, Cut It.  It comes from the same makers of Crayon Physics and utilizes the same physics based principle as the latter.

The only difference is that you use scissors to cut up blocks and get the white box to hit the green platform. Definitely a fun and intriguing small game.

Unlike Crayon Physics though, the game is pretty much a small, mini game and feels like a test game rather than a fully developed one. However, with their work ethos of one game a month, I guess, it’s not really that surprising.

The gameplay, though, is pretty innovative and definitely makes for a fun time. As a player, your main objective is to bring down a small white box onto the stable green platform. You will need to cut up objects to make sure that the box falls to the green platform. Players can only cut one at a time and the white cube has to sit solid on the green platform before the level clears.

After playing the game for a bit, you will realize that the game is quite challenging. There are levels where players would feel that getting the right “cut” is purely done by chance, but it really just requires a lot of thinking.  There are multiple solutions to just one level so it’s pretty interesting to see how different players react to the game.

As for controls, if you mess up, you can press the spacebar to restart. Press the letter M, if you want to move one level ahead and then N if you want to go back to another level.

Related Links:
Cut It Official Website
Cut It on DIY Gamer
Cut It on 4Player Podcast
Cut It on Gamer Crave