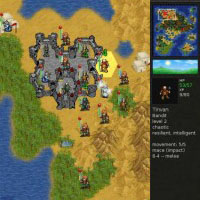 Itching to find a new game, polish your strategy skills and play against others online? Here’s an open-source turn-based strategy game with a fantasy theme – Battle for Wesnoth.

Battle for Wesnoth might not have the fancy graphics as other commercially available turn-based computer games, but it is definitely a smart, engaging and a lot of fun to play.

Battle for Wesnoth has a fantasy background featuring six factions to choose from. It has six races plus over 200++ of unit types so you are surely never to get bored easily.

Play with the computer or challenge up to eight friends in multi-player fantasy wars. Build your own army, recall your toughest heroes, and pick your own unit types specifically for your type of gaming style. With so many stuff to choose from, it would be hard to let go of this game once you’ve started it.

Since this is an open-source software, Battle of Wesnoth is available in a lot of languages so you can even play with your friends from across the world. Play over their multiplayer server, or over LAN, or play some random scenario campaign – and be prepared to spend hours of fun right in front of your computer.