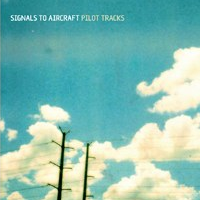 “Pilot Tracks” is Signals To Aircraft’s debut album released only last December. The 11-track album has an interesting collection of lighthearted, upbeat songs for easy listening and slow, moody ones with heavy riffs to set a more serious tone. The songs can only be described as “passionate and melodic”, with a lot of replay potential. This isn’t a huge surprise since Signals To Aircraft’s style is quite similar to The Pavement and The Weakerthans’. This isn’t necessarily a bad thing, of course. Signals To Aircraft has their own unique sound that sets them apart from their counterparts.

The hands-down favorite would have to be “Window Seat”. The city spins/like a giant carousel…I was hooked from the first line! It’s a bittersweet feel-good song with a simple melody that just takes you away. I also like “Fall Down Stairs” because the opening riff builds up just the right amount of suspense before the upbeat refrain. I like the contrast. Other good listens are “Still Life”, “Glass Half Full Tonight”, and “Hunting Polarbears”. Actually, all songs are worth listening to! I’m putting the whole album in my player so I can listen to it wherever I go. That’s how much I like “Pilot Tracks”. Honestly, not bad for a first try.

Signals To Aircraft is a German indie rock band that was founded and is currently based in Schweinfurt, Germany with Björn on guitar and vocals and Andreas on bass way back in 2003. It was only in 2005 when Tobias joined to play drums, and only in 2006 when Matthias got on board to play guitars, thereby completing the line-up. They then toured Spain around late 2007.