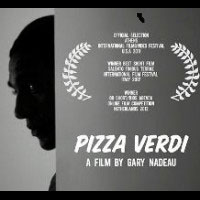 Experience a tense game of cat and mouse in Pizza Verdi, a 7-minuter film written and directed by Gary Nadeau. The film had already received much much attention and award from festival circuits including the Salento Fibus Terrae International Film Festival, Athens International Film and Video Festival, and BiosAgenda Online Film Competition.

It opens to a seemingly normal pizza delivery when the main character hears an angelic voice coming from the posh apartment. Upon discovering where the moving voice is coming from, a twist of power play opens up where the audience’s first speculation about the characters’ are dramtically changed.

Cast in black and white, the film makes full use oof its skilfull experimentation as each sequence is framed perfectly in artistic brilliance. The filmmakers builds the tension in between the dominating silence which is effective in giving mystery and power to the short.

Starring Maria Zamora and Norm Lewis (2012 Tony Nominee for Outstanding Actor in a Musical), you can never go wrong with the performances. The clash in each personality was clearly executed, from the status, the personality, and the music each one takes.

But even through the differences, what makes this short remarkable is how the two characters united through the power of music.

Cinematography or content wise, Pizza Verdi is a visual gem. It encapsulates a normal moment and casts layers over layers of suggestive symbolism and narrative from the characters.