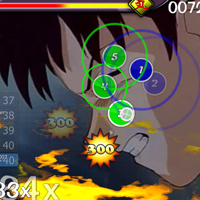 Osu! – This Free Rhythm Game is One Click Away!

The evolution of rhythm games did not stop with Dance Dance Revolution and Guitar Hero.

Rhythm games take on a new face as different types of gameplay are introduced. The Nintendo DS rhythm game called “Ouendan” inspired a skilled team of gamers to create their own free-to-play rhythm game. After combining excellent gameplay and community-generated beatmaps, they called this new rhythm game, Osu!

The gameplay consists of the same elements found in Ouendan: You have to tap the circles on the screen, drag a ball across a path and rotate a spinner as fast as you can. These actions are of course, timed to a song of your choice. Since this free game is played on the PC, and unless you’re lucky enough to have a tablet PC of your own, you will be performing these actions by clicking your mouse.

No Boring Songs, Only Your Favorites!
Osu! does not only offer the same touch-beat gameplay, but it also lets you choose your own songs and make your own beatmaps. There are no boring default songs to waste your time on because with this game, you are immediately given the power to choose your very first song from their list of downloadable songs.

Create your own beatmaps
Not satisfied with the list? You can make your very own beatmap of your song of choice. They have an easy to understand tutorial of how to make your own beatmaps which is already included in the download. You can edit existing beatmaps and create more challenging versions of the songs you already have.

Nurturing Community
The community is what probably makes this game a lot more special than its counterparts. All your efforts are recorded online which makes you part of a big online ranking system. The game also has a multiplayer system that allows you to have fun with other players in Osu!’s gigantic community. You can communicate with other players and find out whose taste in music is similar to yours!

This game is a nice treat for rhythm game fans. Not only will you be able to enjoy this free game by directly downloading it, you will also have full control of the songs that you’re going to play. Customization of beatmaps and the awesome community is just the icing on top of a very big (and very free) cake that is Osu!