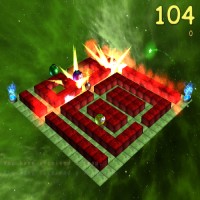 I Have No Tomatoes

Beating stress can be a lot more fun if you have I Have No Tomatoes on your computer. This fun and stress relieving game lets you see just how many vegetables you can smash in a span of ten minutes.

The game is a great combination of Pacman and Bomberman. Essentially, you have a square grid where you run around from veggies and at the same time place bombs to smash or kill them off. It’s definitely a fun game to play. The gameplay is quite simple. You get a good supply of bombs that you can use to smash and get rid of other vegetables. The bomb can be directed in any direction to target as many veggies as possible. Graphics are awesome as well since it is all in 3D. The lighting effects are nice and it’s a highly addictive game once you try it out.

The game runs on several platforms including Mac, Linux and Windows. I Have No Tomatoes features great sound effects as well. However, there are some things that would make it better, like maybe a joystick support. Although it’s relatively minor, there’s no way to go ahead and view the top scores without restarting the game. Also, it would be great if they could provide time options, like instead of having the game last for a whole 10 minutes (which I think is too long) maybe they can make it 5 minutes or 3, depending on the player. It can be quite jarring since it’s the same goal over and over again.

Nevertheless, the game is fun to play while on a break. Now, go and smash those veggies!