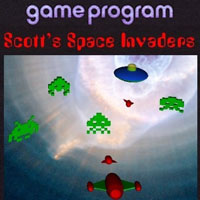 The restored game contains all of the original features, in the aspect that the overall feel and look of the game remains original, however, improves in the user friendliness department, making the game less troublesome. Scott’s Space Invaders is a sleek and dynamic design, paying the original game it’s much deserved credence.

I’ve always loved the game of Space Invaders, and have always wanted to get a hold of an old Space Invaders arcade machine (besides the point). Scott’s Space Invaders looks, feels and sounds like the real game but only improves on general playability and, as I said above, user-friendliness. Scott’s Space Invaders does not use the conventional keyboard rocket ship control, but rather, shifts control to your mouse. This makes the game more dynamic, allowing you to really get quite involved in the game.

The game includes the classic alien ship layout, as illustrated above, and still includes the little rocket ship hovering teasingly across the top (which takes some skill to hit, I might add). Scott did his job, I’d say, and provided us with a great game!

Scott’s Space Invaders is a modern take on the classic Space Invaders theme. I’ve tried to keep the game play as classic as possible, while adding a few new perks that include:

* Multiple missile launchers — you can get powerups that will let you fire two, or three missiles at a time
* Shields — the shield powerup will give you a 1-second energy screen to protect you against enemy attacks
* Hull Plating — your ship can be beefed up to absorb more hits before being destroyed
* Starburst Missiles — blasts a whole bunch of invaders out of the sky with one shot

Although the game play is inherently two dimensional, the game does use DirectX 9.0 to render 3D graphics. The space invaders spin around (they are 3D models) as they move.