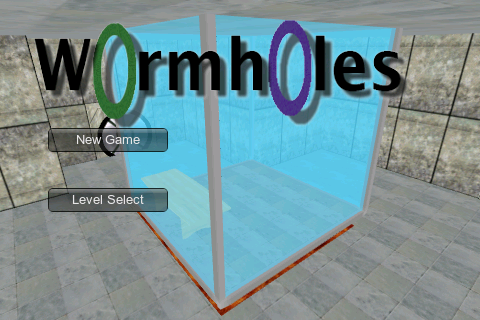 Wormholes is an iOS game that will keep many brain-freak gamer hooked onto their iOS device for hours. What really appeals to many game fans about Wormholes is the uncanny resemble it shares with Valve’s (maker of Half-Life and Half-Life 2) Portal.

The game is said to be developed by a fan and has nothing to do with the original Valve Portal, but due to its very close resemblance to the Valve Portal PC and console version, Valve has directed the developer of Wormholes to offer the app for Free. The game has numerous 3D puzzles to be solved in the underground chambers.

Your weapon for survival and mayhem is the A978 Wormhole GUN, that helps you to create wormholes within your environment and cross levels. What adds up to the entire gameplay is the need of logical use of cubes and buttons around the various parts of the levels that enable you to open doors and helping in bringing you to the finish point.

The iOS platform is belived to be one-of-the-best gaming platforms available, and with much richer content being developed for the iPhone 4, iPad & iPad 2, iPod Touch 4g and the game engines being used improving by leaps and bound, surely iOS users are in for the biggest gaming treat of their life. The game is available on the AppStore for free, and the current updated version works only on the iPhone 4, iPod Touch 4g, iPad, and iPad 2.