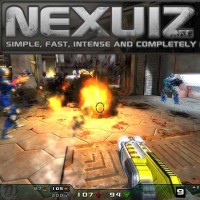 Nexuiz is a very engaging free 3D death match game. Dying to shoot some alien scum or simply pass off a lazy Saturday afternoon? Give Nexuiz a try. It’s an open source 3D deathmatch game created by Alientrap. Development for the game started back in 2002 and until now it’s still gaining a lot of favorable responses from gamers.

Nexuiz can run on different kinds of platforms including Mac and Linux, aside from the traditional Windows. Players can choose from several different game modes from CTF, deathmatch, domination and of course, single player campaigns which will lead players to survive through 20 levels of chaos.


The nice thing about Nexuiz is that it seems to have the basics of 3D fps completely covered. Attention to detail is great, gameplay is interesting and challenging,  and the audio is pretty good too. Essentially a deathmatch game, players have the option to go for a whole range of weapons with which to carry out their mayhem. Movement of the characters are pretty smooth. It allows players to easily run or duck out of the way from enemy fire.

Though its strength lies in tournament and team modes, single player mode cannot be dismissed easily. The game features smart AIs that will try hard to blast your eye sockets off. No hesitations.

Although requirements for the game are pretty basic (Windows Vista/XP/2000 above, 400 MB of HD space and at least 512 RAM) it is advisable to try not to run the game in pretty old computers. The game has been known to cause crashes in really old computers even after just opening it.