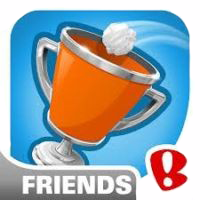 Paper Toss Friends is the sequel to the original smash hit game and developer Backflip Studios has upped the ante making it more exciting with an addition of a multiplayer mode. The game, available for the iPhone and iPad, has the same goal as the original and that is to flick an object into the bin. This is a very simple but addictive game, and you’ve probably played something similar to it in the office or at home.

The biggest difference from the original is the multiplayer option and it works just great, making it a lot more fun than the original. Because the game is so popular it won’t take long before you find someone to play against.

Aside from players around the web you can also challenge your friends on Facebook and Twitter – if the playoffs are getting more heated increase the difficulty levels. Not only is it a lot of fun, but you also get to choose various objects to throw, plus there are a lot more environments too.

The fact there are a lot of objects and environments will be welcomed by a lot of players especially when you play the game for long periods. Among the most fun are throwing trash cans on the lap of an intern and a grenade on the boss’ desk.

If you have been playing paper toss in the office or the original game, this is something you will enjoy. If it’s your first time you will also get a kick out of its simple but addictive nature. Probably the only problem you’re going to face is spending too much time playing it!