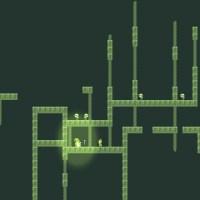 Myrktorch is an interesting game that has a title that’s as tough to pronounce as its gameplay. The game was created for the Ludlum Dare 20 challenge, an event where participants are encouraged to create a game within 48 hours. The event was created by Geoff Howland and has been holding a competition since April 2002.

This cool 2D platformer was created by Gustav Kilman, the developer of Steambolt. In the game, you play a priest-like hero who has to kill the undead with the help of a light halo that emanates from a torch.

The game is a bit difficult so you might want to brace yourself and expect a real challenge out of this one. For a game that was created over the weekend, it’s pretty solid. The graphics are in 2D but it’s very clean and polished.

For gameplay, you need to make your way through each level by killing off the host of undead you come up against. By exposing the undead to your holy light, you can easily kill them off. However, the light does dim little by little so you need to restore its glow by standing next to a torch.

There’s a jam version that contains an additional boss fight to make it even more challenging. It’s pretty tough to beat the boss though. In fact, you might want to brace yourself for a good amount of frustration before you can even begin to think that you can do that.

Also, don’t expect a save point to help you get through because there’s none. Nonetheless, the game is rather short, so you might not really need one and it’s cool gameplay definitely makes it worth checking out.