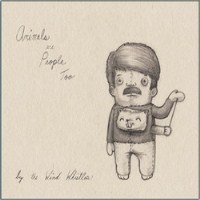 The Wind Whistles: Animals Are People Too

The Wind Whistles is an amazing indie folk pop duo from Canada comes out with their sweet and dreamy second release, Animals are People Too, under indie netlabel, aaahh records. Known for catering to artists that create great acoustic folk pop, sure enough this duo falls under the same category.

With their melodic acoustic guitar, poppy chants and harmonic vocals, this album is filled with luscious, soothing sounds that will take you away into some beautiful poppy field and leave you basking under the warm glow of the sun.

Definitely an album you can’t miss out if you love aaahh records’ roster.

This quaint little album opens with an semi uptempo track titled, Turtle.  With quirky lyrics, it is a fun and very enjoyable track. The beautiful combination of vocals is pleasing to the ears. Although the song isn’t as catchy as I want it to be, it is still quite likable. Art & Work is another beautiful cut that showcases Liza Mozer’s extremely angelic and relaxing voice. With a steady beat, the cut eases into your psyche and stays there for some time.

A more alternative acoustic flair is The Quiet Voice which sort of reflects the duo’s musical penchant for loud sounds. Spooks is a cute track that features a jaunty beat. It features old school vocals by Tom Prilesky at the beginning and it seamlessly combines with Liza’s voice.

Despite coming from heavier backgrounds, (both Tom and Liza come from a noise punk band and a grunge band, respectively) they still managed to create lovely folk pop. Although compared to their first effort, their “louder” tendencies have started showing up in this second effort.

Overall, the compilation is still a cheery album that’s filled with light, breezy tracks. It might not break any records but it’s the perfect album to listen to if you just want a compilation to play on a happy, bright, sunshiny day.