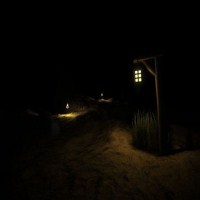 In for some good old scare-fest? Candles might be right up your alley. This scary, atmospheric game is still in its initial release but so far, it’s gaining a lot of interest in the indie gaming community. Its dark storyline and moody graphics are enough to keep you on the edge of your seat as you play.

Developed by Lasse Westmark Nielsen, the game is available for free download on his blog. The game is pretty intense so you might want to brace yourself if you have a knack for scaring yourself silly.Â There are still bugs here and there but the entire game is playable from start to finish.

If you love Amnesia and interested in a similar type of gameplay, you’ll certainly enjoy Candles.

With Candles, you play a guy-with-no-name who comes home and finds his house infested with imps. You see, imps love to dwell in the dark and since your generator has run out of fuel while you were out, imps promptly invaded your home. Your goal is to explore every single room in the house, light the candles (apparently, imps hate the light) and then make your way down the basement to refuel as well as start up your generator.

Graphics for the game is quite good and the soundtrack is spot on. Everything is quite dark until you light up a candle so you might want to adjust the brightness or contrast in your monitors. As you go your way, you’ll be given instructions on what you need to do or which places you might need to explore. Mr. Postman was kind of enough to tack a notice in your door as well warning you of what happened.

Game controls are pretty basic. Use WASD keys to move around and use the mouse to guide your way. For the graphics, great care was put into the details. It adds a pretty nice touch to the overall gameplay. Can’t say much about the background music since it adds itself extremely well to the gameplay.

Like mentioned, the game is in its early stages so it’s not flawless. When you jump around the bed for fun, you’ll be able to see the entire skeletal structure of the house. Nevertheless, the game is great fun. There’s very little that you can complain about this game except for the minor glitches. Overall, it has all the right elements of a horror, suspense game. You’re getting a pretty good bargain anyway especially since it’s offered for free.