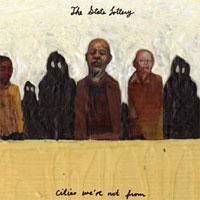 The State Lottery: Cities We’re Not From

If straight up punk rock is what you like, you’ll enjoy The State Lottery’s Cities We’re Not From. Fusing together the basic elements of punk with their own musical ethos, this album creates an exciting brand of matured punk rock. The tracks deal with growing up, experiencing new things and eventually moving on.

From a traditional punk sound to melodic emo punk, the compilation easily makes these songs worth downloading.

Cities We’re Not From is filled with tracks that reverberate with an old punk sound. Although it’s safe to say these guys aren’t aiming for the sharp edge sound of punk icons The Sex Pistols, they do have the gruff vocals and the swagger down to pat.

Opening up with the reflective title track Cities We’re Not From. With lyrics like, “We live in cities were not from/Make our beds in neighborhoods that we barely belong/Searching for some sort of community/And it seems alright, but I cant deny that Im still so lonely.” It serves as an ode to life’s endless journey; hopping from one place to another looking for that special something.

Meanwhile, Night of the Johnstown Flood contains raw lyrics about the sentiments of most young people today. Other must listen cuts in the album include Two Way Street and the  fast paced track Ridgewood.

Overall, the tracks might take some time to get used but in the end, it does burrow itself in your senses. It’s essentially punk rock minus all that anger and rebellious tendencies. Think of it as a set of songs done by an older, more matured punk rocker, looking back on his life.

You can also check out the band’s latest release, When the Night Comes.