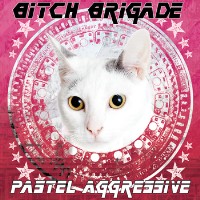 Although the label that released this gem is no longer active, Crunch Pod did leave quite a few awesome compilations to check out.

Pastel Agressive from talented electronic maven, Bitch Brigade is one of these albums left behind. Consisting of experimental synth pop with added girly rock and pop vocals, the album is the perfect soundtrack to a laid back dance club night out.

Bitch Brigade started back in 2006 and comes from the Land Down Under. They are made up of Agr1ppa (Agrippa Cryoflesh,) Zero_ (keyboards) and Ping! (drums).

Little is known about the band themselves so let’s just delve into what makes this album quite special: the music.

Pastel Aggressive is actually a remix album so expect different versions of the two primary tracks on here. Kickstarting the dance compilation is Licky the Carnivorous Pony remixed by Polluted Axis and the Magical Glue Factory (yes, you can expect more quirky titles from the album). The track is a synth/strobe-light feel, sexy track. Bitch Brigade knows how to keep their audience entranced, making you want to listen from start to finish.

The other track on here is Bubblegum Cyber, it’s a single that sees the artist proclaiming how she has a fetish for “pink and cute, and PVC…” It’s a great cut and each remix adds a different feel to it.

Overall, even if you only occasionally like dance music, it’s hard not to find this album intriguing. Personally, I ended up liking it after one listen. Bitch Brigade brings in a new layer to the sound they create, ensuring that they’re not just repeating formulas so familiar in today’s dance scenes. Go check it out. It’s a name-your-price-download.