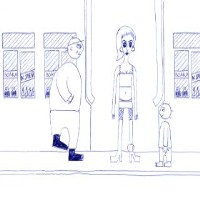 Ulitsa Dimitrova is a German game created by Lea Schönfelder and Gerard Delmas. This game actually won big as part of the 2010 IGF Student Winners.

This one is quite unique and interesting. It’s not just the graphics but the gameplay and storyline (or lack of it) are one of the major quirks for the game. You’ll be playing, Pjotr, a homeless boy that lives in St. Petersburg. Why a seven-year old boy is living on the streets? You’ll need to find out for yourself.

There are disturbing things in this game, be warned, but the uniqueness of the graphics alone is interesting enough for the adult of us to give it a try.

The game lets you play as a 7-year old homeless boy. Did I mention he’s already a chain smoker at this age and he has to constantly smoke? Well, he is. He spends all his time smoking. He has to have his cigarettes so he pretty much does everything just to get them. This includes robbing or begging. Occasionally, he visits his mom who is a prostitute and an alcoholic. In another occasion, he actually ends up liking a girl.

The entire game is done in this pen-like doodle which is definitely captivating in places. The music is a bit annoying but tolerable. Once the player gets tired and stops playing. Pjotr slowly dies and freezes in the cold winter.

Although the game does have emotional value that’s worth checking out, it doesn’t really develop into something more. Apparently, there’s no goal to the game except to simply enjoy the moment of being alive, robbing medallions off cars, or even desperately begging just to get a smoke.

Overall, the game is okay. The graphics are worth checking out but you might not get anything more except a temporary fascination of the game.