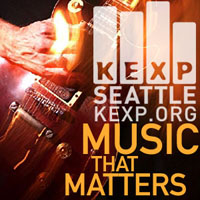 I fell in love with the series nearly two years ago during one of my lovely commutes to work for one simple reason – it brings you the most amazing variety of music just in time when you can no longer listen to the same songs you had on your iPod since 2000. Each podcast comes with a theme and a selection of sounds (from nearly every genre imaginable, with a slightly greater love for alternative and indie rock) put together by some of the greatest DJs from Northwest.

KEXP began as a tiny 10-watt public radio station all the way back in 1972. Based in Seattle, its broadcasting license is owned by the University of Washington – the place where the album rock station started to gain its first base of loyal fans from across the university. In 1975, however, the station’s signal was boosted and for the first time KEXP was heard outside of the campus. Over the years the station have grown and became an influential cultural force spreading far beyond Seattle’s borders.
In 2008, Radio New York (91.5 FM WNYE) announced it’s partnership with 90.3 KEXP, which would bring KEXP’s independent music programming to New York every day for six hours increasing the number of listeners by additional 14 million.

Music That Matters is a weekly podcast series bringing DJ curated mixes of wonderfully eclectic full length songs, where many of the featured artists come from Pacific Northwest, New York, and around the world. As the series is already on its 237th podcast it makes the the decision of choosing one of them for a sample download here on our website that much more difficult – so lets just listen to its latest release Spring Released curated by DJ John Richards.

Tracklist:
1. A Sunny Day in Glasgow – Drink Drank Drunk
2. Chad Valley – Up & Down
3. Steve Mason – Boys Outside (Keep Shelly in Athens Remix)
4. The New Division – Starfield
5. Voxhaul Broadcast – Leaving on the 5th
6. Tapes ‘N Tapes – Badaboom
7. Pains of Being Pure at Heart – Heart in Your Heartbreak
8. Yellow Ostrich – Whale
9. Violens – The Dawn of Your Happiness Is Rising
10. The Cave Singers – Swim Club
11. The Lighthouse and the Whaler – Under Mountain, Under God
12. The Veils – Bloom

If you want to listen to more amazing tracks be sure to check out the archive of the ‘Music That Matters’, or all the other amazing podcasts offered for free by the station as ‘The Song of The Day’ (exclusive in-studio performances, unreleased songs, and recordings from independent musicians), ‘Live Performances’ (From The Arcade Fire to Zero 7, live performances have consistently been an important and unique aspect of KEXP’s programming), and ‘Video of the Week’ (exclusive in-studio performances from independent musicians).
Related Links:
Music That Matters on iTunes
Music That Matters on KEXP
KEXP Official Website