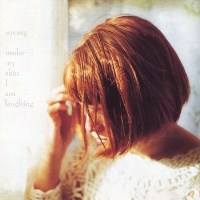 Earwig: Under My Skin I Am Laughing

Earwig is a three piece band, led by the chanteuse, Kirsty Yates, Sergei Tardo, and Dimitri Voulis. This lineup only lasted for one record though, the experimental and hauntingly melodic, Under My Skin I Am Laughing. This compilation was originally released back in 1992 under La Di Da. This compilation is the only full length release from the electronic, experimental outfit.

Afterwards, Sergei and Kirsty pursued on as the Insides. They released their record Euphoria to great acclaim and this also helped solidify their jazzy, trippy, and transient sound.

Currently,  the group are on hiatus. Their last effort as Insides was a full length record released back on 2000, Sweet Tips. Nevertheless, you can take a listen to this Earwig record and see how it all started.

As a group, Earwig is defined by Yates’ dispassionate, low key vocals. It contrasts strangely with the funky, dreamy sounds generated by random instruments, mostly of the guitar. The group’s sound helped define what was to become known as Post-Rock in the UK.

Under My Skin I Am Laughing opens up with the intense single Every Day Shines. The sharp instrument work coupled with Yates non-caring vocals makes this a trippy sounding track worth checking out from the compilation. Another cool track is When You’re Quiet. This time, Yates’ vocals are more prominent among the sonic soundscape. Although she still sounds like she’s humming after swallowing a huge amount of Valium; her vocal work still sounds quite amazing.

On their Last FM page, they are described as follows: “Earwig is a high energy, stripped down, underground-rock, three piece with emotionally intelligent lyrics. They deftly straddle the line between reckless rock and roll mayhem and deliberate organized song crafting. The Who and Nirvana both come to mind.”

Definitely an album worth checking out especially for those who love 90s trip hop.