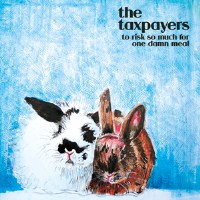 The Taxpayers: To Risk So Much For One Meal

Listening to The Taxpayers, means undergoing plenty of mixed emotions. From anger, to confusion, to doubt, relief, happiness, joy, and everything in between; it’s like a rollercoaster of sound that makes you sick, but in a good kind of way.

Mixing punk, ska, country, folk and so much more in between, To Risk So Much For One Meal, is filled with plenty of exciting cuts to check out.  This is a follow-up record for this Portland, Oregon group and it seems they’re still continually evolving their sound. Compared to their previous record, this one adds a little more punk rock to the mix; resulting in a louder, “angstier” but definitely more enjoyable record. Grab it right now and have a great time bouncing around to this one.

From the folk, ska punk opener, The Windows Break; you’ll recognize that this band has a special something up its sleeve. The angry, almost shouty vocals is enough to make you stand up and take notice. The vocals coupled with catchy, upbeat guitar strumming, loud drums and overall, good beats makes this song a stand-up-take-action cut. Even if this doesn’t end up becoming your favorite, it’s one track that will definitely stick.

To keep up the momentum, it’s followed by an equally loud, personality filled single, And The Damn Thing Bit Him! This one picks up where the first single left off with the upbeat, electronic ska sound being a little more prominent on here. Meanwhile, a cut like Louisiana Hot Sauce Rainy Nights, reflect a more folk country side that the group has shown affinity for since their previous release. The vocal work also adds a nice, unusual touch to the song.

02 And The Damn Thing Bit Him

There’s no doubt the crew has great production values and instrument work on this record. However, there are  some songs that end too abruptly, for my taste. It makes it hard to have a nice, proper close since most of the time, you won’t get one.

In the end, the album features a nice mix of fast and slightly slow songs, mostly fast though. The band are good at what they do, but plenty of people have pointed out that they sound way too much like label owner, Jeff Rosenstock’s band, BtMI! (Bomb the Music Industry!) Whatever the case may be, this record has plenty of energy and perfect if you’re looking for something that’s filled with energy and eclectic sounds.