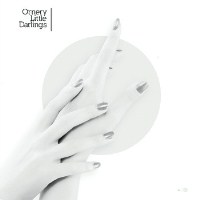 Ornery Little Darlings create sexy indie rock that they describe as “a highly improbable ornery-as-hell-love-child between Billie Holiday and Lou Reed.” Although in places, it does sound like this, there are more elements to their songs than this.

Made up of mainly Emmi Chen, Jason Ewers, and Paul Puschautz; the group’s sound is characteristic of acoustic guitars, sultry female vocals and a 50/60s dirty rock vibe happening all over. It’s one of those albums that make an impression after you hear the first track.

Although not everything is a gem in the EP, it does contain enough tracks to please even the most timid soul. You’ll find a track or two that you’ll love to listen to and even maybe keep in your playlist for the long run. The 21 minutes or so running time of Ooh La La, starts with an appropriate 35 second Intro that begins with sweet honky tonk piano that builds up to a scream. It’s followed by one of the most prominent cuts in the release, Games. This one combines deep and masculine spoken word lyrics to beautiful 50s style singing from Emmi. Its classic, jazzy elements make the song quite intriguing to listen to. Definitely one of those tracks worth having on your playlist.

Logic of an Alcoholic also uses the same spoken word singing, with some really cool chanty vocals in the chorus part. The lyrics are witty and very entertaining as well. Three Way Death Play is where they add some diversity. Its raw acoustic guitars reminds me of Bob Dylan guitars (with Morrissey’s voice)  if he ever decided to tape himself singing from his basement.

Meanwhile, Build the Night opens with jangly guitars accompanied by deep vocals and beautiful background singing from Emmi. For some reason the track exudes an electronic rock feel. It’s one of those cuts that you can imagine playing in some dark, sleazy club on a Saturday night. In the end, the album is a cool record to check out and worth every second of download. Give it a go.