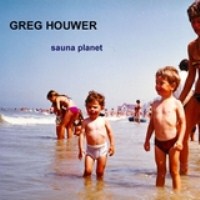 Most of the songs are accompanied with simple acoustic guitars, percussions and melodic low-pitch vocals. I won’t recommend this record if you dislike anything that could potentially lull you to sleep. The entire feel of the album is that of a laid back compilation that you might want to play as background music if you are drifting off to sleep in your hammock.

The record opens up with the title track, Sauna Planet. The song is rather short, clocking in at 2 minutes or so and features downplayed singing from Houwer. It has a semi-upbeat sound and sprinkled with random samples here and there. Meanwhile, tracks like Pee-Pee-Maw-Maw and Wrote a Song for You have that classic 90s vibe to it. The scratchy quality and the incomprehensible or semi-garbled lyrics add a layer of grunge to the otherwise pop track.

I Want You But Only Forever is a slow tempo acoustic cut that exudes an eerie feel thanks to the deep vocals and the weird whisper-like background. It’s a lovely track though that has hints of Morrissey intertwined in it. Another quiet cut is Waltzing in the Dark. It’s a beautiful song that mixes harmonica and the staple low-key vocals from Houwer.

Overall, even though there are some tracks better skipped out. Much of it is pretty good. If you want the perfect soundtrack to a lazy Saturday morning, then you’ll find a couple of tracks here worth checking out.