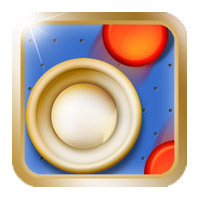 Although it’s been around for some time in the iPhone, Air Hockey Gold has just finally made it’s way down to the iPad. The good thing is that it works and looks even better when played on the iPad rather than the iPhone.

The game was developed by Acceleroto from 2008-2010. Air hockey has always been an age old favorite, whether it’s played in some college game room or played using the latest gadgets. Air Hockey Gold for the iPad is nothing different. It features the same basic gameplay with some additional options to help make the game more interesting.

Even though Air Hockey Gold is offered for free, there is a catch. There are several ads snuck in between the games. However, if you would like the Ad-free version, then you can pop $.99. The price is actually worth it. The game is perfect if you want to pass off the time playing an uncomplicated game.

Although it is also available in the iPhone and iPod Touch, personally, it’s more playable in the iPad because of the latter’s bigger screen. You can play by yourself against the computer or go for a two player game. When challenging the computer, you can choose from several game difficulties, ranging from Kiddie to Insane!

You can opt to play with the traditional one puck or up-the-anti by going for two pucks at the same time. Play with a friend on the same iPad. The first one to reach 7 goals wins the game.

The latest version features bug fixes and a cool restart button so you can easily start again if you want to.

Using the iPad as the game platform definitely has its perks, for one, you get a bigger room for playing with a friend. Also, the interface is quite sleek. Pretty soon, you won’t even notice that you’re playing on a digital screen instead of the actual air hockey table. Definitely a great way to waste some time.