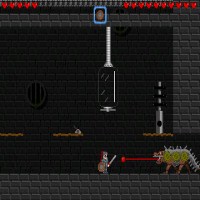 The Legend of Edgar

If you are a fan of old school arcade games, then it’s not hard to notice that The Legend of Edgar is heavily inspired by the iconic game, Legend of Zelda. It’s not just the graphics that reflect the Nintendo title, but also the gameplay.

The Legend of Edgar was created by Parallel Realities, same developer for Blob Wars which was featured here in Frostclick last August. It’s the latest release from the crew. The game is an adventure platformer that lets you play as Edgar on a quest to find his father.

Join our hero in this cool, freeware adventure game. Download the album in the developer’s website or hit the Download Game link on the upper left.

As mentioned, you play Edgar whose worst fears happen when his dad doesn’t return home after heading out one stormy night. He realizes that his father was captured by the evil sorcerer that lives beyond the swamp in the woods. Your job is to find him by going on an adventure and solving quite a few puzzles along the way. However, there’s also quite a bit of fighting in the game as well.

For controls, pressing left+CTRL lets you go ahead and use your current weapon while left+ALT will let you pull out your shield. You’ll find puzzles in each level. There are also several characters that you’ll encounter in the game. More often than not, they will provide you with a quest that you’ll need to finish in the game.  At the end of almost every level, you’ll encounter a boss battle.

Overall, the game is fun to play. There’s a nice retro feel to it and is quite nostalgic particularly for old-school gamers. Level as well as game design is pretty good too. Check it out.