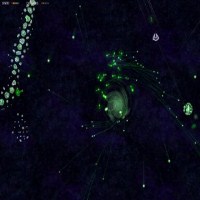 Star Opus: Episode I “Pathway to the Pollux”

Dubbed as the “real mother of all retro games,” Star Opus I takes retro shooting to a whole new level. The game induces some hardcore Asteroids style of gameplay along with some lovely, lovely tunes to go along with it.

Star Opus I is essentially a one-man project. The first episode is currently released as a freeware and so will Episode II, which is currently under construction. However, it seems to be set for a commercial release later on. Let’s just hope this doesn’t come soon enough.

In the meantime, grab this download from their website or simply hit the Download Game link. It’s perfect if you just want to get away for awhile, head to space and shoot some asteroids. If you think this will be another space, shooter game, well, you’re right but you’re sort of wrong as well. The game does borrow from plenty of retro arcade shooters but it injects its own little twist in there as well. For one, you’ll get hundreds and hundreds of enemies coming at you at any one time. Plus, there are over 25 types of enemies all carrying their own sets of skills and behavior.

Basically, your goal is to “bring peace” to the galaxy again by navigating your way through enemy territory and decimating every enemy in sight. Of course, while in space, the usual hazards apply. There are black holes in certain areas, for instance, so you need to watch out for those.  The game also features about 50 jump points that you can explore.

In the end, the game does provide some nice graphics and gameplay down your way. The only real downside though is that it can easily get boring. I think the first few minutes does serve as a tutorial of sorts; allowing the player to get comfortable but after that you realize there’s really nothing much to the game. Of course, maybe it’s just me and my craving for adrenaline that’s talking. If you don’t mind the slow pace, then this one is worth checking out. Check out the trailer and head over to the download.