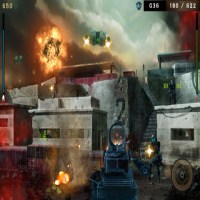 Out of the countless iPhone games available, it’s often tough to find the ones that are actually worth checking out. Well, Overkill is one game that’s definitely worth downloading. Developed by seven man-developing studio, Craneball Studios, LLC; the game is fast gaining steam. In fact, as of March 20th this year, it has become one of the most downloaded free game on iTunes.

Some of its biggest draw include fantastic graphics, awesome gameplay, and best of all, it’s offered absolutely free. The game is perfect if you need some stress buster in between breaks or simply if you want to inject some fun and chaos into a boring afternoon.

If you love shooter games and can go on shooting nameless virtual enemies and soldiers for hours at a time, then Overkill should be right up your ally. In the game, you play a hired mercenary who has to kill every single enemy in sight. Of course, you get dough to buy and upgrade your weapons as you go along.

Unlike other shooters, the game doesn’t involve much moving since you’re stuck in this first person perspective where enemies just pop up and you have to shoot them down. Think Time Crisis, only with bigger, better guns and much more awesome graphics.  And just like the classic game, it’s a race against time when it comes to killing all the enemies.

Starting out can be a bit of a pickle since you’ll be getting the lame-o guns with bad accuracy. As you gain points and earn money though, you’ll have the option to upgrade or purchase bigger and much better equipment. Like most games today, you also have an option to shell out some real-life dough by buying in-game currency which you can use for upgrades and getting new equipment. Personally though, I think you can get by without purchasing anything, but that’s just me.

Overall, despite some kinks here and there, Overkill is certainly a game to check out. It’s one of the best and most addictive games I’ve played so far and should certainly charm you as well.