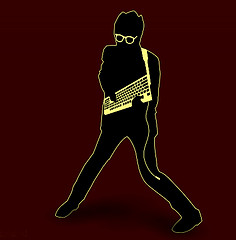 Frets on Fire was created as an entry to the Assembly 2006 Game Development Competition by Unreal Voodoo and it placed first in the competition. The game tests your musical skills and the speed of your fingers in a similar way to the very popular Guitar Hero games do, but instead of forcing you to buy the guitar controllers, the game & the console, it lets you play your favorite tunes free using your keyboard and your home computer (and it is available for PC, Mac & Linux). Of course if you would like to, you can also use the guitar controllers or generic joysticks.

The game includes hundreds of songs composed by the game’s community, but it also let’s you create your own tunes or upload Guitar Hero™ I and Guitar Hero™ II songs.

The rules are quite simple. The player has to strike the correct colored squares at the appropriate time during the songs to produce sounds. Each correct hit increases the score and after a period of time without mistakes, a score multiplier kicks in. If a note is missed, the multiplier goes back to 1. If too many notes are missed, the song stops. The objective of the game is to finish a song and score the biggest amount of points possible.

Although still not fully bug free, this game is a great free alternative to the commercial Guitar Hero releases.