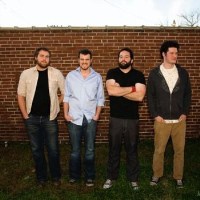 Pretty Little Empire is a four piece Missouri band formed back in 2008. The group has released several records under their belt, including the 2009 debut, Sweet Sweet Hands. Their 2010 release, Reasons & Rooms was hailed as one of the top 10 best local albums by The Riverfront Times.

This 5 track compilation showcases PLE’s brand of melancholic alternative indie rock with touches of folk and pop here and there. The crewÂ performed every single track live at KWUR.Â This showcases their latest single as well as a couple of songs from their previous album. A great compilation worth checking out. Perfect for moments where you feel like reflecting.

Whenever you listen to this group, it’s hard not to feel enchanted with the vocals and the moody instrument work. Even though some of these tracks are included in the group’s albums, each version of the tracks for this particular record is distinct and showcases its own personality.

According to KWUR’s little note on BandCamp, “Pretty Little Empire playing live on air during the KWUR Hustle Week All-Night Broadcast. This session was recorded between the hours of 1-2 am, and they absolutely killed it!” They weren’t exaggerating when they said that.

Listening to the compilation gives you a great sense of rawness and emotion that can only be captured when musician/s are completely connected with their music. You can sense this beautiful almost, sonic landscape of vocal harmonies and instruments in this EP. Definitely a compilation that would serve as the perfect mood setter.

Pretty Little Empire is made up of Justin Johnson, William Godfred, Evan O’Neal and Wade Durbin.