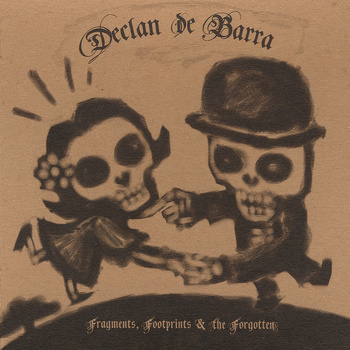 Have you ever wondered what you might get if you crossed Johnny Cash with Nick Cave? I bet the result would sound quite a bit like Declan de Barra. Not only does he tell his song narratives similar to Nick and Johnny, but he can sound similar to each one at different times on this brooding album that goes by the name Fragments, Footprint, and the Forgotten. Born and raised in Ireland, Declan has recently moved to Los Angeles. He record his first three albums in Ireland and it will be interesting to see how his move here affects his music.

“Call To Arms” opens the album and could easily be playing in the background an updated Western movies that show the truly tough conditions in the most visceral way.
In “Midnight Swell” Declan uses the higher range of his voice that is a welcome surprise upon first listen.
The rebel persona of Johnny Cash appears on the song “Fuck The Begrudgers”. The dirty guitar and angry delivery of the vocals make for a rollicking track.
The lyrics and arrangements of this are never are too far from Irish folk music. Declan did everything but master this music. Because of this there is a consistency to this and much of the production is straight forward.

I first found Declan’s music while listening to the Cardiff, Wales based The Waiting Room Radio Show. DC, who birthed the show, plays multiple songs every week that come from Creative Commons albums. His pod casts are free downloads on iTunes.