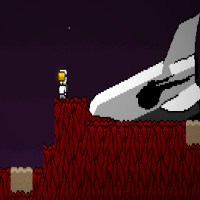 Beacon is a short, fifteen minute freeware game that lets you control a spaceman that has crashed and landed in some unknown space rock. The game might be short and features simple 2D graphics but there’s something that’s enjoyable and fun in playing this game.

This was created for the Ludum Dare 48 game, where developers who participated had to create a game in a 48 hour deadline. Despite the game’s simplicity, it features a wonderful and atmospheric mood. There’s also plenty of depth in the game that makes you wish it was a little longer.

Beacon lets you play an astronaut that has crashed landed on an unknown planet. Thanks to the bumpy ride the little dude got, he’s a bit dazed and not sure where he is. Your job is to help him put together the pieces of why and how he ended up there in the first place. As simple as the premise might seem, the game actually offers a lot to its players. From the charming soundtrack, to the fun gameplay; Beacon showcases that simple games often make the best ones.

Game controls uses arrow keys to move left or right. Pressing C and Up lets you jump and use your jetpack. Graphics might not be completely impressive but it works well with the game’s setup. Plus, once you start playing the game, you’ll realize that the level design more than makes up for the games lackluster 2D graphics.

For gamplay, you’ll need to dodge projectiles and jump over obstacles as they are fired at you. If you die, you spawn right back where you died so there’s no need to keep repeating certain areas. The soundtrack is very enjoyable. It has a nice retro feel that suits the graphics and design perfectly.

In the end, Beacon definitely delivers more than you would initially expect. Since the game was initially released, it has been polished, making it a little more faster and better than the first version.